U.S. Bellows, Inc. has adopted and encourages the use of the definitions of pipe expansion joint components and related equipment as published by The Expansion Joint Manufacturers Association. The definitions are taken, in part, from the Ninth Edition of the EJMA Standards

Accumulation Barrier In applications where flash is present in the gas stream, a barrier is installed in the cavity of the expansion joint. The barrier is constructed of low-density insulation wrapped in fiberglass cloth. The accumulation barrier helps prevent the particulate from building up in the cavity along the bottom of a joint in horizontal ducting.
Angular Rotation. The displacement of the longitudinal axis of the pipe expansion joint from its initial straight line position into a circular arc. Angular rotation is occasionally referred to as “rotational movement.” This is not torsional rotation.Axial Compression The dimensional shortening of a pipe expansion joint along its longitudinal axis. Axial compression has been referred to as axial movement, traverse or compression. Learn more.

Axial Extension The dimensional lengthening of a pipe expansion joint along its longitudinal axis. Axial extension has been referred to as axial movement, traverse or compression. Learn more.

Anchor, Directional A directional or sliding anchor, is one which is designed to absorb loading in one direction while permitting motion in another. It may be either a main or intermediate anchor, depending upon the application involved. When designed for this purpose, a directional anchor may also function as a pipe alignment guide. In the design of a directional anchor, an effort should be made to minimize the friction between it’s moving or sliding parts since this will reduce the loading on the piping and equipment and ensure the proper functioning of the anchor.

Anchor, Main A main anchor is one which must withstand the full bellows thrust due to pressure flow, spring forces, etc.

Back-Up Bars: Metal bars with fastener holes used for clamping along the edges of the fabric gas seal to the belt attachment flange.

Bellows The flexible element of a pipe expansion joint consisting of one or more convolutions and the end tangents, if any. Learn more.

Belt Attachment Flange: The face of the expansion joint where the belt is clamped using a back-up bar. The flange can be turned out (see Outboard Flange) or turned in (see Inboard Flange). Either way, many designs allow for the belt attachment flange to be offset from the duct (see Standoff).

Breach: The opening in the duct where the expansion joint is installed.

Cold Shell: A duct that is internally insulated with refractory material.

Control Rod Devices, usually in the form of rods or bars, attached to the pipe expansion joint assembly whose primary function is to distribute movement between the two bellows of a universal pipe expansion joint. Control rods are not designed to restrain pressure thrusts.

Convolution.  The smallest flexible unit of a bellows. The total movement capacity of a bellows is proportional to the number of convolutions.

Pipe Expansion Joints  Any device containing one or more bellows used to absorb dimensional changes, such as those caused by thermal expansion or contraction of a pipeline, duct, or vessel. Learn more.

Fabric Belt: The flexible non-porous element of a fabric expansion joint. The fabric belt must be able to withstand the thermal, pressure and chemical conditions. Modern fabrics accomplish this with a chemically inert barrier bonded to high strength substrate. For high-temperature applications, a layer of insulation is incorporated into the belt.

Fabric Expansion Joint: An assembly that utilizes a fabric belt element to allow for the movement of ductwork, as opposed to a metal expansion joint which allows for the movement by means of convoluted metal bellows.

Flutter: The phenomenon that can occur in the fabric material due to the turbulence of the gas flow. Flutter can occur in locations where pressure fluctuations occurs, such as near dampers and fans. Intense flexing of the fabric could lead to premature failure, thus the use of liners, fillers, or heavier fabric is recommended.

Gasket: A non-porous deformable material that is installed between the belt attachment flange and the fabric belt. The gasket allows a gas-tight seal when the back-up bar clamping action is applied. 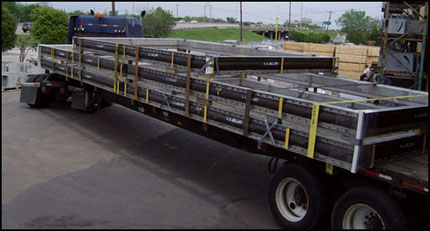 Heat Seal Splice: For Fluoroplastic material, a process of splicing or repairing the fabric material with means of a special iron and a film of PTFE sheet.

Hot Shell: A duct that is externally insulated.

Inboard Flange: A design where the inside of the belt attachment flange is not accessible from outside the expansion joint.

In-Line Pressure Balanced Pipe Expansion Joint An in-line pressure balanced pipe expansion joint is designed to absorb axial movement and/or lateral deflection which is restraining the pressure thrust by means of tie devices interconnecting the line bellows with outboard compensating bellows also subjected to line pressure. Each bellow set is designed to absorb the axial movement and usually, the line bellows will absorb the lateral deflection. This type of pipe expansion joint is used in a straight run of piping. Learn more.

Insulation Pillow: In applications where the gas stream temperature is greater than the fabric belt alone can withstand, an insulation pillow can be installed, usually by pinning to telescoping liners. An insulation pillow is constructed of high-density material wrapped in cloth with wire mesh reinforcement.

Insulation Tape: A thin layer of insulating material, usually woven fiberglass, that is installed between the belt attachment flange and the fabric belt. In certain cases, insulation tape is also used between the fabric belt and the back-up bar. The purpose of the tape is to prevent the conduction of high temperatures to the fabric material where it is clamped.

Internal Liner  A device that minimizes contact between the inner surface of the bellows of a pipe expansion joint and the fluid flowing through it. These devices have also been referred to as liners, telescoping sleeves, etc. Learn more.

Lateral Deflection The relative displacement of the two ends of a pipe expansion joint perpendicular to its longitudinal axis. This has been referred to as lateral offset, lateral movement, parallel misalignment, direct shear or traverse movement.

Liner: The liner is a metal plate or plates that are designed to protect the fabric belt from the gas stream while at the same time allowing the expansion joint movement. The liner can be bolted, welded, floating, or integral to the standoff frame. A single liner is connected to the upstream side of the expansion joint. In some cases, a second “telescoping” liner is used on the downstream side.

Limit Rods Devices, usually in the form of rods or bars, attached to the pipe expansion joint assembly whose primary function is to restrict the bellows movement range (axial, lateral and angular) during normal operation. They are designed to prevent over-extension or over-compression of the bellows while restraining the full pressure loading and dynamic forces generated by the main anchor failure. Learn more.

Mating Flange: A structural angle or channel that is welded to the end of the ducting facilitate bolting or welding the expansion joint into the system.

Motion Indicators Devices, usually in the form of rods or bars, attached to the pipe expansion joint assembly whose primary function is to restrict the bellows movement range (axial, lateral and angular) during normal operation. They are designed to prevent over-extension or over-compression of the bellows while restraining the full pressure loading and dynamic forces generated by the main anchor failure. Another common example of motion indicators is found on slotted hinge assemblies. With the hinge pin used as an indicator, permanent marks are scribed upon the hinge hardware to record the original cold position. The relative distance between the pin and the cold position mark can then be used to determine the movements imposed upon the bellows.

Outboard Flange: A design where the inside of the belt attachment flange is accessible from the outside of the expansion joint.

Pantograph Linkages A scissor-like device. A special form of control rod attached to the pipe expansion joint assembly whose primary function is to positively distribute the movement equally between the two bellows of the universal joint throughout its full range of movement. Pantograph linkages, like control rods, are not designed to restrain pressure thrusts.

Pipe Alignment Guide A pipe alignment guide is a form of framework fastened to some rigid part of the installation which permits the pipeline to move freely along the axis of the pipe. Pipe alignment guides are designed primarily for use in applications involving lateral deflection and angular rotation.

Planar Pipe Guide A planar pipe guide is one that permits transverse movement and/or bending of the pipeline in one plane. It is commonly used in applications involving lateral deflection or angular rotation resulting from “L” or “Z” shaped piping configurations.

Purge Connections Purge connections, where required, are usually installed at the sealed end of each internal sleeve of a pipe expansion joint for the purpose of injecting a liquid or gas between the bellows and the internal sleeve to keep the area clear of erosive and corrosive media and/or solids that could pack the convolutions. Purging may be continuous, intermittent or just on start-up or shut down, as required. These are sometimes called aeration connections. Learn more.

Rated Movement The maximum amount of movement (axial extension, axial compression, lateral deflection, angular rotation, or any combination thereof) which a pipe expansion joint is capable of absorbing. This rating may be different for each size, type and making of pipe expansion joint and is established by the manufacturer.

Shiping Devices Rigid support devices installed on a pipe expansion joint to maintain the overall length of the assembly for shipment. These devices may also be used to pre-compress, pre-extend or laterally offset the bellows.

Single Pipe Expansion Joint The simplest form of pipe expansion joint, of single bellows construction, designed to absorb all of the movements of the pipe section in which it is installed. Learn more.

Standoff: The distance of the fabric belt from the gas stream. The proper standoff allows belt cooling in high-temperature applications and prevents the belt from being pulled into the gas stream in negative pressure.

Swing Pipe Expansion Joint A swing pipe expansion joint is designed to absorb lateral deflection and/or angular rotation in one plane. Pressure thrust and extraneous forces are restrained by the use of a pair of swing bars, each of which is pinned to the pipe expansion joint ends.

Tangents The straight unconvoluted portions at the ends of the bellows.

Tie Rods Devices, usually in the form of rods or bars, attached to the pipe expansion joint assembly whose primary function is to continuously restrain the full pressure thrust during normal operation while permitting only lateral deflection. Angular rotation can be accommodated only if two tie rods are used and located 90 degrees as opposed to the direction of rotation.

Vulcanize: A process of heating and adding sulfur to an elastomeric material. Vulcanizing is required in the manufacturing and splicing of elastomers.

Weld Ends The ends of a pipe expansion joint equipped with pipe suitably beveled for welding to adjacent equipment or piping. 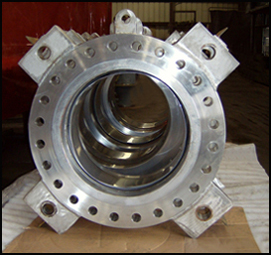