Frequently operating plants with critical applications desire the ability to monitor the condition of a bellows element, so if a problem arises, timely plans can be made to replace the bellows. The two-ply testable bellows element has this ability with two unique features. First, both plies are redundant and capable of withstanding the system pressure and temperature. Second, the space between the plies can be monitored for changes in pressure, so that if a leak were to develop on the inner ply, the outer ply will continue to operate and the system pressure would be indicated by the activation or the orange pop top. The orange top remains passive until there is a leak in the inside ply causing pressure to build up between the plies causing the early warning orange top to activate and pop up. 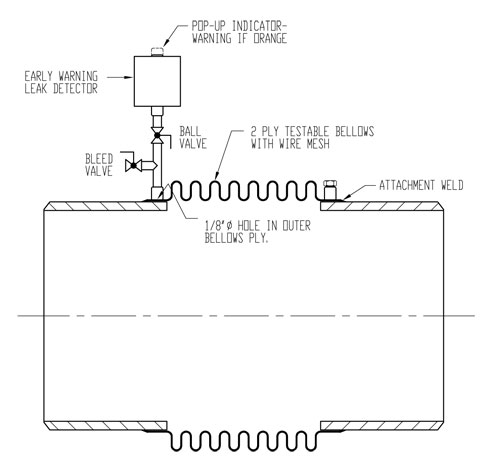 The two-ply bellows with a leak detector will add 15% to 30% to the initial cost of the bellows itself. This is a real cost saving considering the effect of a failed bellows in a critical piping system that could shut down an operating plant. By using the orange pop top, the end user minimizes potential downtime in high-risk services where a bellows failure could cause an unscheduled shutdown.