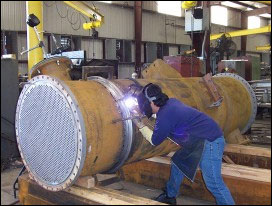 Heat Exchanger shell bellows are used on fixed tube sheet heat exchangers. Bellows deflection is only axial and can be either extension or compression depending on the differential expansion of shell and tubes. In most cases the tubes are hotter than the shell, moreover tube material is sometimes high alloy, i.e. Stainless steel or nickel alloy, which expands about 50% more than carbon steel. Design of heat exchangers is covered by the TEMA1 standards and ASME Sec VIII. Div1.

Heat exchanger shell bellows can be heavy wall flanged and flued bellows. Design of such Bellows is covered by ASME Sec VIII Div 1, Appendix CC. Heavy wall bellows are rugged, generally having a wall thickness equal or near to the shell wall. Because of material thickness, no cover is necessary. The disadvantage is that a lot of fluid can be trapped in these corrugations and a drain is sometimes required. Those bellows are formed by welding flanged and flued plates together, thus creating 1, 2, or 3 U-Shaped corrugations. ASME Code inspection and U-2 stamp is required.

Either heavy wall or thin wall bellows can be designed to give a satisfactory service by calculation. It should be remembered that the hydrostatic pressure and load (PA load) must be carried by the tubes which act in essence as tie rods.

Engineering is done per EJMA equations as well as per the latest revisions of the ASME B31.3, ASME B31.1 and ASME Section 8, Division 1. Design calculations are performed using in-house developed design software and calculations are further verified using hand calculations. U.S. Bellows/PT&P also has full in-house finite element analysis capabilities which we use often to prove this methodology to prove our designs.

Additionally, U.S. Bellows/PT&P does extensive testing to prove designs. Each bellow and expansion joint unit undergoes in-process quality control as well as final in-house inspection and testing prior to shipping. There are several tests, U.S. Bellows uses to prove the designs: 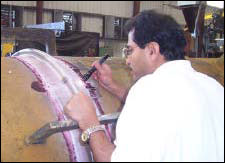