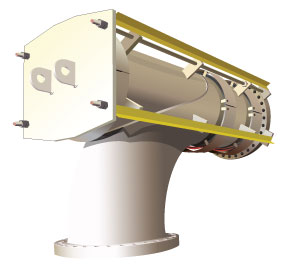 Expansion joints are often included in industrial piping systems to accommodate movement due to thermal and mechanical changes in the system. When the process requires large changes in temperature, metal components change size. Expansion joints with metal bellows are designed to accommodate certain movements while minimizing the transfer of forces to sensitive components in the system.

Pressure created by pumps or gravity is used to move fluids through the piping system. Fluids under pressure occupy the volume of their container. The unique concept of PRESSURE BALANCED EXPANSION JOINTS(PBEXJ) is they are designed to maintain a constant volume by having balancing bellows compensate for volume changes in the bellows (line bellows) which is moved by the pipe. An early name for these devices was “pressure-volumetric compensator”.

Two general configurations of constant volume expansion joints are those which are installed where the pipe changes direction and those installed where the pipe does not change direction. (often called “in-line”). Figure 1 shown below is an example of a PBEXJ used where the pipe changes direction. The two bellows are mechanically linked so any change in volume in the line bellows due to change in its length, either compression or extension, is compensated by an opposite change in the balancing bellows. In this PBEXJ the two bellows have the same diameter so the volume does not change during compression or extension of the line bellows. Pressure thrusts are transferred to the members which tie the bellows together rather than in the piping system.

Figure 2 shows PBEXJ used when the direction of the pipe does not change. In this example two smaller bellows have opposite movement to the single larger bellows. When they are compressed, it extends. When they extend, the larger bellows is compressed. The sizes are chosen so the ratio of the mean diameter of the larger bellows to the diameter of the smaller bellows is equal to the square root of 2 and this PBEXJ maintains a constant, volume when the bellows change length. The piping designer sizes the line bellows to accommodate changes in length expected in the piping system at the point where the PBEXJ is installed. The spring rates of both PBEXJs in Fig. 1 and Fig. 2 are defined by the spring rates of the mechanically linked bellows.

Pressure is used to describe the force transmitted by a fluid to the solid boundaries it contacts. It is expressed as a force per unit area and this force is at right angles to the surface at each point. Pascal’s Principle states that pressure (a force) applied to an enclosed fluid is transmitted to every portion of the fluid and to the walls of the containing vessel. Piping designers must consider all forces operating on the system. When the fluid is imcompressible, forces can be transmitted rapidly. With a PBEXJ properly placed, forces which change the length of the bellows will not be transferred to sensitive connections of the piping to the system.

Mechanical changes caused by various factors are a major problem in piping design. During operation of an industrial process the following steps occur:

Engineers often specify a pressure balanced expansion joint in the piping connecting the boiler feed-pump turbine exhaust to the condenser in conventional fossil-fueled electric power generating plants. [1] Variations in operating conditions cause frequent changes in temperature, pressure and steam quality. Condensers are designed to withstand steam generator overloads without causing significant loss of electric power, but the piping system must accept the forces associated with these variations.

The major advantage of a pressure balanced joint is its ability to absorb externally imposed axial movement without imposing additional pressure loading is objectionable. [2] The force resulting from the bellows spring rates is not eliminated, but it is relatively small when compared to the pressure thrusts.

Examples included in the EJMA standards [2] point out the relation of the guides to the function of the anchors and guides to the function of the pressure balanced expansion. Figure 3 below illustrates an example using a pressure balanced universal expansion installed at a change of direction between two anchors. The pipes are guided so expansion of both pipes is toward the joint. In this example, the bellows, which are components of the universal joint, accommodate movement in both the horizontal and vertical directions.