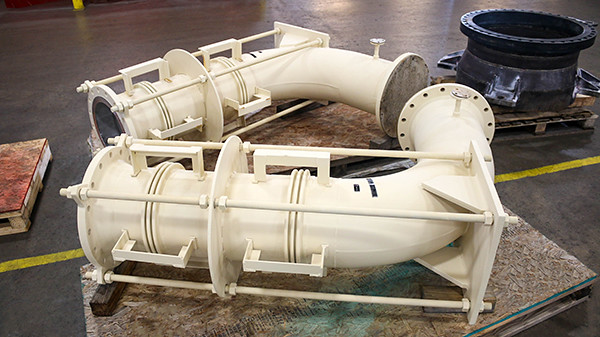 U.S. Bellows, a division of PT&P, custom-designed universal elbow expansion joints for glycol heat transfer piping for one of the largest chemical and refining companies in the world. Such industrial complexes produce chemicals such propylene oxide used for making plastic goods, tertiary butyl alcohol used in making flavors, perfumes, and as a solvent, ethylene oxide is used as an intermediate product in the production of fabrics and antifreeze, polypropylene is used for making consumer products such as those for automobiles, and Catalloy process resins which are used in packaging and automotive production. Glycol heat transfer enables effective process cooling. The bellows, flanges, plates, pipe, nuts, and threaded rods are all fabricated from 304 stainless steel and the units were painted for added protection. The expansion joints are designed for a 16” NPS and are 68-3/8” long. They are designed for an operating pressure of 67 psig at 378°F with 854 lb/in. axial spring rate and 0.2” of axial compression and with 205 in/lb lateral spring rate and 1.51 in lateral movements. Both expansion joints were hydro-tested at 101 psi and QC inspected before shipment. Generally, a universal expansion joint is composed of two bellows connected by a common pipe or center spool. This type of assembly allows any combination of the three basic movements: axial, lateral, and angular allowing for safe absorption of temperature-induced expansion and contraction of building materials, and vibration, or to allow movement due to ground settlement or seismic activity. In addition to expansion joints, PT&P provides a full range of engineered pipe supports, pre-insulated supports, shock control, restraint, and support devices, ASME fabricated vessels, tanks, pig launchers, and more.