Bellows TID Fluid Area:
It seems reasonably apparent that in a system with a bellows the pipe internal fluid pressure load is not balanced by pipe longitudinal tensile forces and must be restrained by external forces. It can also be seen that if the bellows ID exceeds the pipe ID, an additional pressure force will be transmitted through the pipe as a compression load which must also be externally restrained. Hence one component of the total bellows thrust load is based on the bellows ID.

Corrugation Sidewall Thrust:
It can also be visualized that internal pressure acting on the sidewall of the corrugation would tend to spread the corrugation out in the longitudinal direction, and this load must be restrained by an external reaction force. As an approximation consider a 1″ wide radial strip cut out of a corrugation. 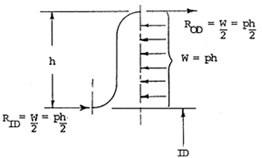 For a fixed ended beam with uniform load, RID = ROD =

A more precise development of corrugation sidewall load and an equation for bellows effective thrust area is given in the Appendix. A comparison on 5 sample problems of typical bellows dimensions, including one extreme case of OD/ID ratio, shows that the percent error involved in using the mean diameter approximation is generally less than 1% and only 1 1/2% in the extreme example.